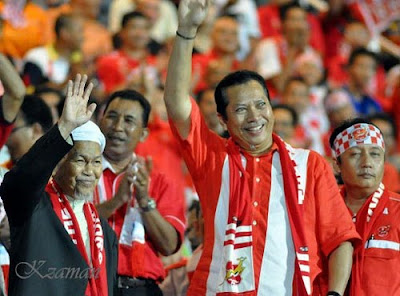 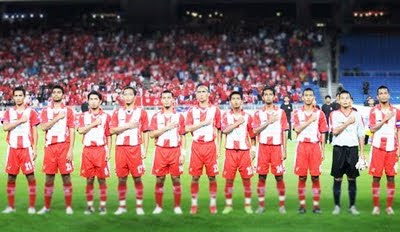 Salam,
The legendary Pele called football as the beautiful game and I indeed wholeheartedly agree with him. Why it's so beautiful? To begin with, football is a sport that beautifully combines the dual elements of physical as well as the mental aspect of it. It is more or less similar to criminal offence which requires the physical aspect (actus reus) as well the mental element (mens rea) to successfully secure a conviction. To illustrates both elements do exist is the fact that computer games are made to cater for both; like Pro Evolution Soccer (arcade style) and Championship Manager (strategy game or isyak sampai subuh game).
Physical meaning it comprises of a quick feet like Cristiano Ronaldo's, strong tackle like Carlos Puyol's, accurate passes like Steven Gerrard's and certainly a strong finish into the back of the net like Didier Drogba's. Referring to the mental part of the game among others are what we can see in the coach's tactics and also the way a play maker orchestrates the engine room, transforming a defensive threat into a successfull counter attack and also the mind games played between the goalkeeper and the goalpoacher during a spot kick.
A good friend of mine once described football as a stupid game played by 22 half naked men chasing a ball. I can't blame him for having that kind of perception as he may have viewed this beautiful game from the physical aspect only. His intelligence and artistry may not up to the mark to appreciate the beauty beneath the ugly face of Tevez or the black uniform of the match official (aka lefree kayu). Football may not be as brilliant as chess or as artistic as synchronized swimming, but definitely not as not so smart like squash (banging the ball to a wall and you call that a sport? sorry Nicole David).
My 9 year old son who really like the Gunners though I'm a Toon supporter once asked me; "kenapa abah buka tv mesti tengok bola, tengok bola mesti buka tv?" I can't really answer the loaded question apart from shifting the blame to other tv shows by answering; "takkanlah abah nak tengok sinetron ke, Nur Kasih ke Buletin Utama ke, kalau Hagemaru ke Fukuchan ke ok lagi". I guess there is the element of addictiveness surrounding the game. The willingness to tahajjud in the wee hours to watch your favourite team battling it out and waking up everyone when a goal scored is so hard to resist.
In football, the element of drama add up to the excitement and madness. To see Cristiano Ronaldo or Drogba performing superman's dive, the bone crunching tackles and sliding ones too in the rain, the legendary overlapping by Roberto Carlos, the trademark free kicks by Juninho Pernambuchano, the text book headers by Alan Shearer, not forgetting managers like Sir Alex lashing out to the 4th officials or Martin O Neill's leap, to name a few is a sheer pleasure to watch. The drama, hype and joy is upgraded tremendously should you brace yourself to the stadium to see the game live. Whatever you do in the stadium from Mexican wave to maki hamun the referee to booing the opponent and jumping in ecstasy when your team scores; are experience that is worth treasuring.
You can't be regarded as a true fan if you only support football played abroad. Supporting your home team locally is a must albeit the huge gap in class with the international leagues. That's why this coming Saturday, fans of The Red Warriors and also the Deer will throng our Wembley in Bukit Jalil, passionately supporting each team in the Malaysia Cup Final. As shown by TGNA and Tan Sri Annuar Musa that football can also be a tool to unity (much better than the apanama 1Malaysia); it is hoped that the game will be played at the highest level of quality as well as mutual respect. Let's hope that the Deer will be frozen by the Red Warrior's performance come Saturday night and the fairy tale romance story of Kelate in the Malaysia Cup is ended with a convincing win over the Brylcream boys and co. Gomo Kelate Gomo! Wassalam.
TREASURE YOUR LIFE