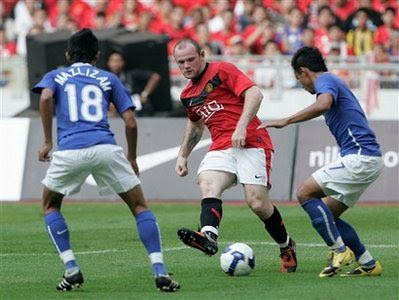 I have a confession to make; I dont like MU. I even joined anti-MU fan club. Although I admit that I do admire some of MU players individually like Giggs, Cantona, Evra and mmm... thats about it. That's why the lure and hype of MU coming to our country to play against Rajagopal's team does not convinced me to go to Bkt Jalil though some friends did invite me to join them.

And when Orga, a diehard gunner fan smsed me and informed that astro (owned by pakcik ananda who denied buying my NUFC) was showing the game live; I didnt even bother to rush to the tv. Combined with my prediction that MU will at least thump our boys 5-0 with my anti MU sentiment, so at last I finally reached in front of my tv on the 30 th minute. By then it was already 2-0. But, I stayed and watched the game until the last minute of the coverage (not the last minute of the game). And I found a few lessons to be learned that can be applied in our life. 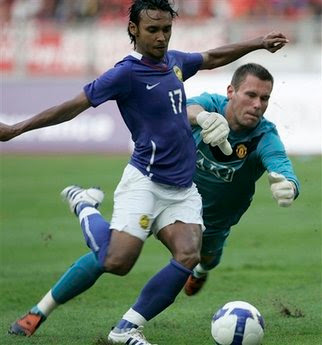 1) Size does matter but its the size of your heart that matters most. Majority of our players are even shorter than Wayne Rooney let alone to compare with Van Der Sar, Ferdinand and co. But they battled it out with their hearts out, chasing every ball and use less long ball tactics. In our life we might be handicapped or lacking in something but if we decide to give our best shot, we might achieve something rather than nothing.

2) Fear not your opponent but fear the most if you are not prepared. Rajagopal definitely has been doing some extensive homework and prepared his tactics well. He didnt try to park the bus in front of the goal buat boldly directed his boys to control possession, use short passess and allow them to express themselves. Thats why we got a Thierry Henry strike from Amri Yahyah. Thats why I believe in life there's no such thing as someone born as a winner. However intelligent you are, still without proper preparation, you might turn out to be a loser. 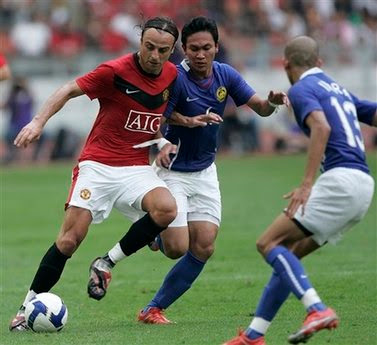 3) Nobody is immune or immortal, everyone has his own weakness. Its upon us to exploit our strength and take advantage of opponent's weakness. MU certainly stuggled in the scorching heat and humidity and Malaysia used some quick paced players for the good. After all when you're are at home you are at least expected not to be defensive. In our daily life, explore our strength and use it for the good. On the other hand, identify opponent's weaknesses and use it to crush them (kejam betul).

4) You may be weak but if you are compose enough you'll survive. One thing very clear from the game; the Malaysian team most of the time was very composed and confident with their game and wasn't ruffled by the megastars. By doing this, youre shifting the burden and pressure to your opponent to overcome your though they initially may have the upperhand. So, aplly it in your life. Don't simply crack under pressure. Presure is good if you can manage it as it gives you the urge to strive more.

Well, we can learn a thing or two even from a football match. Im glad that finally I did post something strictly non legal at all. Wassalam.