THE ART OF CROSS-EXAMINATION (my snippet) 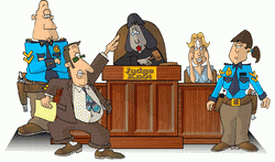 THE ART OF CROSS-EXAMINATION
By Ariff Azami bin Hussein, 9th July 2009-07-08
The article below is the personal view of the writer based from his own experience as well as association and observation of senior dpps and criminal lawyers throughout his "crime" career.

Cross examining a witness is a skill which is neither easy nor it's too difficult to embrace. To be a good criminal litigant you have to learn the curves the hard way. You may spend some time observing or assisting a senior counsel but at the end of the day you have to experience it yourself and try your best to brush up your cross examination skill if you are given the opportunity to do so.

As a comparison to the "civilians" whereby their work percentage might be 90% preparation and documentation while another 10% for court action. For us it is to the contrary; 10% preparation while the remaining 90% happens in the court. That makes criminal litigation enjoyable and alluring as it involves element of spontaneous, whit and to a certain extent, drama.

To begin with, I divide a criminal litigant's style in conducting a cross examination into 2 broad school of thought. First which I call it the "gentleman" style. In this approach normally the lawyer will try to make friend with witness, pacifying or praising him until finally he will agree to everything that is suggested to him. The second style I term it as "the nail on the coffin style". In this style the lawyer will grill the witness normally by way of confrontation and will try to corner the witness without giving chance even to the dpp to re exam the witness. More often than not, both styles are fused together depending on the witness' co-operation and how he answers a question.

Having attending Bersih's case for the past two days with fellow counsels, I noticed a few things that crop up during the proceedings that might have been done in a much better way. My 2 cents opinion here is by no way to teach any one much more to criticize fellow counsels who have been doing a great job not to mention personal sacrifices. It is more of a sharing my experience as well as my personal views on certain issues.

Firstly, there may be some confusion as to the term putting (katakan) and suggesting (cadangkan). Some lawyers might think that both terms give the same meaning and some even use both terms in one single question. In a simple explanation, we should only use the term putting when we are absolutely sure that we can bring the evidence put to the prosecution witness in the defense stage in the event defense is called. Normally it is used to put forward defense version in the prosecution stage. However, the term suggest is normally used to facts or contention that the defense is unable to bring forward the evidence or we are just trying to guess on the facts that may have happened.

Secondly, in the issue of raising objection. On the outset, I totally disagree that a lawyer raise an objection just for the sake of objecting. In other words just to stir up the water. An objection must be accompanied by a sound reason and with underlying principles of law that we strongly believe is in our favor. It shows that we are prepared, articulate and sound in our law. Sometimes, it may even be not worth it to object as the exhibit for instance which the prosecution tries to tender is favoring us. Furthermore, if we are up against a senior dpp like Tuan Anselm, we must be extra careful in making objection for the simple reason he might reply easily and show that we know nothing on what we are objecting.

Thirdly, the same goes to cross examining. We should not be asking questions just for the sake of asking. A case is not won by measuring how many lawyers who ask questions or how long your cross examination is. It depends on the quality of your questions. We should always try to produce what is termed as "loaded questions". It simply means a question where the witness is caught in between; whereby he will look stupid if he agrees or he will be considered as a lousy officer if he disagrees.

Fourthly, a criminal trial for me is like a war. Thus, it is essential to have a plan and to strategize your war plan. You can't just bulldoze or use the prebet adam's style here. The most important thing for a criminal lawyer for me is 3 things that he must master before he engaged himself in the war. Firstly, know your facts either facts from our client and also facts from the prosecution's side. Secondly, know the charge and its ingredients. Thirdly, do make a little effort to study the law that might be relevant to the case.

Last but not least, is the issue of to ask or not to ask a question. I fully agree that a good litigant must possess sufficient experience, skill and intelligence. But it doesn't mean that a newcomer can not perform as well. The trick is to think a moment before you ask a question. The most vital question to ponder is; what is the reason for me asking this question? Will the answer be favourable to the defense? Or will the answer be damaging to the defense in the event the witness disagrees with our contention? These are the questions need to be taken into account first. That is why we are puzzled why certain lawyers do not ask too many questions, for instance Karpal Singh and Gurubachan Singh. That is because they ask only pertinent questions and leave the rest for submission. After all we don't want to give too much clue for the dpp to rectify the evidence in the re examination. The trial might be less dramatic but hey, isn't our goal is to win the case?

With these five observations I rest my case and hope to get some feedback from fellow friends. Wassalam.

me with fellow counsels; zulqarnain, azizzul, hanipa maidin, zamri and 3 of OKTs who was supposed to be a threat to public order...
LOYAR'S LIFE